Why Travel to Panama in 2009? Budget Traveler magazine quotes “Panama has led tourism growth in Central and South American countries for two years running, posting back-to-back 20 and 30 percent gains in 2007 and 2008, respectively”. At its Top 10 Destinations for 200 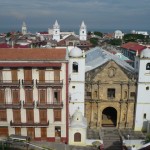 Conde Nast Traveler Magazine also featured Panama at its top picks for 2009. Featuring position No. 12 and next to countries like Canada and Scotland, it also mentions Casco Antiguo as one of the “must visit” in Panama City.

February 26, 2009 " Imagine if New Orleans had ignored the French Quarter for a century" .... "Now the neighborhood vibrates with the rough energy...
Continue reading

Kissing your cash away with a smile!

December 29, 2009 New year resolution? How about kissing your cash away and being happy about it?
Continue reading
Live, Work,
Invest
in Casco.
Arco Properties is the leading real estate agency focused exclusively on residential and commercial properties in Casco Antiguo since 2005. We are the only real estate company specializing in Casco Antiguo that donates 10% of its profits and 5% of the time of its staff in volunteering to non-profit organizations dedicated to the revitalization of the Human Heritage of the Casco Antiguo.