Loved street birthday parties. One of my earliest memories was hitting a piñata so hard I broke the wooden stick, which ended up hitting an adult several feet away. Hey, no one told him to be that close! Then there is another one, where a piñata finally broke and candies fell from the sky and somehow all of a sudden it was ok to jump in there and grab as much as you could, by force if you needed to. Awesome. But in today`s world, when was the last time you saw a street birthday party? well, actually Saturday in Casco Viejo.

It is such a teasing game. The adults at the top raise and lower the piñata so the baby or the kid can´t get it too easily. But eventually they do, sometimes the adult gave them the opportunity, sometimes (with older kids) they totally had to earn it.  And when the treasure falls down, you can imagine what`s next. Chaos, tears, laughter. And then dance and sharing. Food comes, mothers are on top of everything and everyone sing the famous song, in English first and Spanish later with some salsa tempo and a bonus track about ice cream. Cultural note here: you can´t escape the singing part, even when you are a full grown up, suit and tie adult. You will sing Feliz Cumpleaños. If you are not used to it, my best advice is just to own it!

So here it is: the birthday party we bumped into on Saturday after the Esperanza Tour at Fortaleza. Loved the little kid… so serious, he was swinging like pro baseball player! 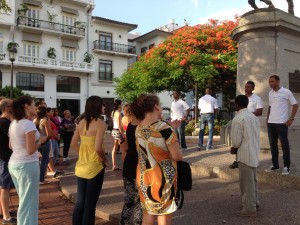 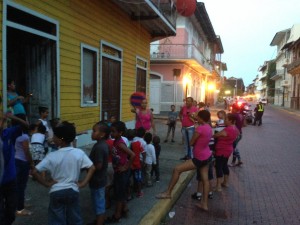 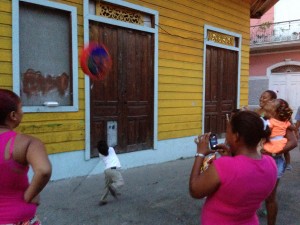 An Evening at Diablo Rosso in Casco Viejo

June 23, 2014 Panama, Casco Viejo, Casco Antiguo We all hate to see abandoned animals in the street (or mistreated ones). In Casco, we`ve been...
Continue reading
Live, Work,
Invest
in Casco.
Arco Properties is the leading real estate agency focused exclusively on residential and commercial properties in Casco Antiguo since 2005. We are the only real estate company specializing in Casco Antiguo that donates 10% of its profits and 5% of the time of its staff in volunteering to non-profit organizations dedicated to the revitalization of the Human Heritage of the Casco Antiguo.