The Subtle Power of Harmony

I´ve heard it many times from my artists friends; from writers to painters to architects: starting with a blank canvas is an issue. In Casco Viejo, where most restorations start with an existing building (in ruins, an empty shell…but with enough elements to “talk to you”, to guide you), starting with an empty lot in a historic context causes all sorts of anxieties. First, and most importantly, you need to respect your surroundings. Then, add the multiple regulations that the Casco Viejo manual has, touching everything from door size to materials and many other elements that at the end make up what we enjoy as Casco Viejo when we visit. It is the effect of the whole interrelated compound. It is ultra complex and it takes quite some time to train everyone´s ear to “listen to the house”.  To try and tackle a historic building with arrogance is like trying to tackle a 500 pound gorila with your naked hands! Each building will tell you who it is and what it wants to be. Your only choice is to listen and use all your talent to adapt.  You would think that with all these restrictions, architects would rather have an empty lot to start from scratch, but no way. That is even harder. Give me the 500 pound gorila. Now, imagine how hard it is to revitalize three blocks filled with empty land right behind a historic plaza like Plaza Santa Ana, a place as historic as San Felipe, but different in essence and style.

To learn more about the experience of designing Casa Balcones, Manzana, Casa Quijano and Casa Korsi, we interviewed last week the architect in charge of the whole collection, Ricardo Arosemena.

The first thing that caught my attention was his comment on how different Santa Ana is from San Felipe in terms of its architecture and urbanism. I have been through both neighborhoods many times, and it took his comment to realize the streets where wider and the buildings where more eclectic, many of them from early century. The goal for him was to design a compound that would speak the same language, that would naturally fit and create a sense of place.  A design where people who had lived there in different times could find elements they could remember with love, but that at the same time could satisfy today´s needs.  And that the whole compound would work precisely as a compound, not a collection of individual objects. They needed to interrelate as a street, to make sense as a neighborhood.

Take how Casa Korsi´s corner starts a romantic, almost melodic conversation with its main street, softly inviting you to walk down fifteenth street, weaving every balcony with the next one, into an experience until you reach Casa Quijano. Far from creating a “statement” project that would break with the area, what the architect was looking for was how to integrate and celebrate the best of it, each one needed to feel so uniquely from there that it couldn´t be anywhere else, even in Panama.  An effect so subtle, but so powerful, that people now and in a 100 years, could look at them and say with pride: Ah! those Santa Ana buildings have been there a lifetime! 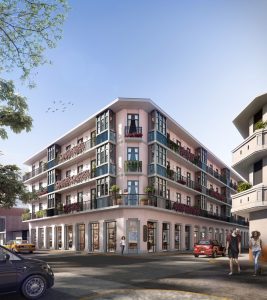 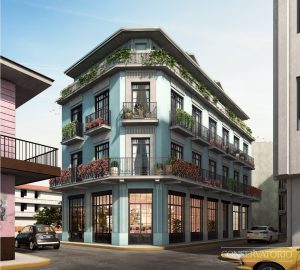 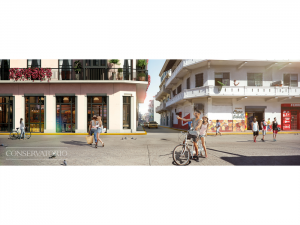 February 14, 2013 Panama Casco Viejo So often you sit down to have beautiful thoughts… while walking by Plaza Herrera, we saw this bench with...
Continue reading

June 6, 2013 Panama, Casco Antiguo, Casco Viejo Last June 2nd, Italy celebrated their anniversary as a Republic.  You might not be aware of this,...
Continue reading
Live, Work,
Invest
in Casco.
Arco Properties is the leading real estate agency focused exclusively on residential and commercial properties in Casco Antiguo since 2005. We are the only real estate company specializing in Casco Antiguo that donates 10% of its profits and 5% of the time of its staff in volunteering to non-profit organizations dedicated to the revitalization of the Human Heritage of the Casco Antiguo.