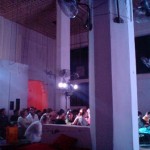 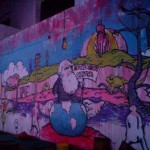 This weekend at Casco Viejo was a lot of fun. It rained a lot, as October tends to be the rainniest month in the year. However, we had a lot of fun! Platea started early, as usual, with jazz night on Thursday and salsa on Friday. But La Casona had also a nice couple of events and our favorite “heavy metal – rock” bar called Baños Públicos (Public Bathrooms) was at its best with Beto playing anything from Hotel California and Canto Boliviano to Samba. Wao!

Here are some shots from La Casona. I was so happy to finally take some pictures from inside. The wonderful high ceilings of the art deco building they are at now makes such a great spot for alternative theatre or movie… but it is hard to photograph! We where there to see the theatre play Karaoke Sentimental, a play by Teatro Lagartija. They also had the art show 7 Pinceles, with fun paintings by Rolando de Sedas, Marta Noemi and Marta Sanchez, among others.

August 25, 2008 A few days ago I got an email from a journalist at The Guardian, as they´ve found somehow my postings on La...
Continue reading

August 21, 2008 Casco Viejo will host a very special event in September. The United Nation´s Environment Programee (known in Spanish as PNUMA) will present...
Continue reading
Live, Work,
Invest
in Casco.
Arco Properties is the leading real estate agency focused exclusively on residential and commercial properties in Casco Antiguo since 2005. We are the only real estate company specializing in Casco Antiguo that donates 10% of its profits and 5% of the time of its staff in volunteering to non-profit organizations dedicated to the revitalization of the Human Heritage of the Casco Antiguo.