Yesterday was Idalibeth and Doña Mary`s Christmas Party.  Every year, they host a party for the neighborhood kids, an event that has grown from being in someone`s borrowed patio to the big Plaza Centenario. At least a hundred kids attend, from all ages: they know each other from school, from their street, from the afterschool programs they attend (like Enlaces or Aprojusan).  Three things are common denominators in all of them: they are from the neighborhood, they are kids, and their parents belong or live nearby a gang (or former gang).

This party means a lot to Idalibeth and eventually as these kids grow it will mean a lot to them too. The idea behind the party, the entire reason for it to exist, was that Idalibeth – a former gang member wife- realized after going through social programs herself, that children couldn´t and shouldn´t be brought up with resentment, independently from each other, taking with them the supposed rivalries among gangs.  One street could not be against another forever and through their children. They had to have a platform to know each other, share, and grow up together.

Not many people know what a success story Casco Viejo has been in this sense. Back in the day there used to be gangs that couldn´t cross from a street to the other.  After going through social programs like Por una Esperanza in 2006, those gangs ceased to exist through the most powerful weapon: education. Now on this stage, their former members are taking steps to prevent going back to square one by teaching their children how to be together.

The party is the result of the involvement of a lot of people. This year, the junior swimming team joined. Thanks Fanny! and Thanks to Doña Mary and Idalibeth for having the vision, taking these steps and keeping it up.

What a great holiday gift! 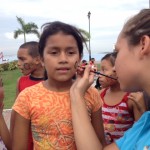 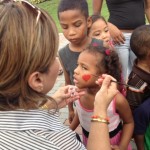 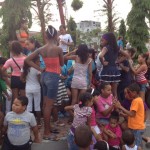 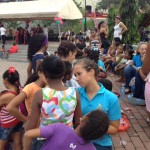 December 20, 2012 Panama Casco Viejo Successful second year!  the Carols by Candlelight concert filled in Plaza Francia with tons of people from all over,...
Continue reading
Live, Work,
Invest
in Casco.
Arco Properties is the leading real estate agency focused exclusively on residential and commercial properties in Casco Antiguo since 2005. We are the only real estate company specializing in Casco Antiguo that donates 10% of its profits and 5% of the time of its staff in volunteering to non-profit organizations dedicated to the revitalization of the Human Heritage of the Casco Antiguo.