The Swedish Legacy of Frederick Ljungstrom in Casco Viejo

By 9th street there is a big ruin that everyone knows as the old power plant that used to belong to “Fuerza y Luz”. This power plant, back in the day, had turbines and cooling pipes into the ocean, today turned into a mangrove. I remember pulling out old receipts from my grandfather, “Fuerza y Luz” slogans were all about promoting the consumption of electricity… oh my! how much times have changed.

What I didn´t know, and a friend called it to my attention yesterday, was that the turbines in this historic plant was maybe one of the few around the world, made by Swedish engineer and innovator Frederick Ljungstrom. According to Wikipedia, he invented steam boilers together with his brother Birger. Wao!

The explanations of their “new” turbine are quite technical, and if you enjoy this type of details, please visit their page HERE.  Their turbine was somehow based on steam, so I guess it made a lot of sense for the plant to be in the ocean.

Now this site has been re done as a parking building, and although no explanation or project has been given to what will happen with the “norias” and few ruins standing, we would like to propose a visitor`s center or at least a proper outdoors exhibition with the history of the plant and the geniuses that helped propel Panama forward. The Canal time was fascinating in its spirit of innovation and discovery, but somehow we forget it was not all done at the Canal itself, but also at the city. And yes, that would be “Casco Viejo”, back then, the only “city” called “Panama City”.

These photos were taken during the construction of the parking lot. The mangrove is still there and the standing structures. Everything else was demolished. 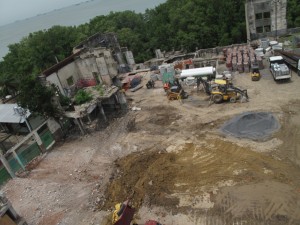 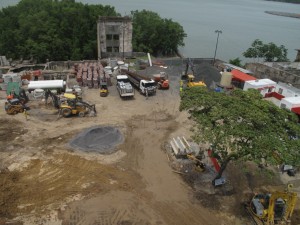 April 27, 2015 Panama, Casco Viejo, Casco Antiguo Anyone asking for an address in Panama will get multiple answers to the same thing. They include,...
Continue reading

September 15, 2016 Panama, Casco Viejo, Casco Antiguo 275 maps including a map by Juan de la Cosa back in 1501 (he was the pilot...
Continue reading
Live, Work,
Invest
in Casco.
Arco Properties is the leading real estate agency focused exclusively on residential and commercial properties in Casco Antiguo since 2005. We are the only real estate company specializing in Casco Antiguo that donates 10% of its profits and 5% of the time of its staff in volunteering to non-profit organizations dedicated to the revitalization of the Human Heritage of the Casco Antiguo.