I came across a magazine called Cuasimodo, which was edited back in the early Republic days. This ad was found in a 1919 magazine, I have to say it is one of my favorites. Stores back then sold everything… at the same place and under the same counter. Items like “soap” were written in BIG BOLD LETTERS, as they were luxury items. Medicines were labeled (hum… were they labeled?) basically “drugs”, and claims of them curing anything would be based on the reputation of whomever sold that jar with pungent dark liquid in it to you.

“El Cielo”, or “The Heaven” listed the items that made it famous or popular. Included, and I`m sure not limited to: rifles, guns, buttons, lace, ladies stalkings, sewing machines, lace, handkerchiefs and shoe soles. Please note that in big bold letters it says: MATA BICHOS (bug killer) and SOAP. Hey, we might have been a rough town, but at least we smelled good! 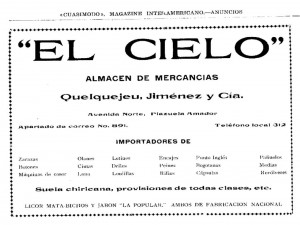 February 19, 2014 Panama Casco Viejo, Casco Antiguo A couple of weeks ago I joined Felix McFresh and his friend Alberto on an interesting city...
Continue reading

The Swedish Legacy of Frederick Ljungstrom in Casco Viejo

June 24, 2014 Panama, Casco Viejo, Casco Antiguo By 9th street there is a big ruin that everyone knows as the old power plant that...
Continue reading
Live, Work,
Invest
in Casco.
Arco Properties is the leading real estate agency focused exclusively on residential and commercial properties in Casco Antiguo since 2005. We are the only real estate company specializing in Casco Antiguo that donates 10% of its profits and 5% of the time of its staff in volunteering to non-profit organizations dedicated to the revitalization of the Human Heritage of the Casco Antiguo.