Anyone asking for an address in Panama will get multiple answers to the same thing. They include, and are not limited to, mango trees (that used to be there), supermarkets, landmarks … and different names of the same street, given at different times.  As a history fan, I blame it all on the Spanish. They started the name fever, we just went on with the party.

At some point, it must have been enough, because someone decided to finally go with numbers for streets and letters for avenues.  However, when giving an address to a Panamanian, I find myself still describing where such and such used to be! At least some of the Spanish colonial names had some sense to them. They were very descriptive: commerce street, butcher`s street or where so and so lived.

Here is an article found yesterday at the magazine Epocas. And a second document I had laying around, so don´t remember where I got it, but they say the same, so it must be right! 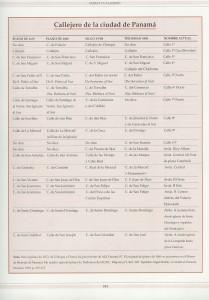 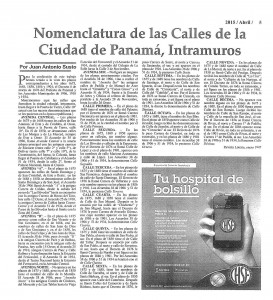 August 15, 2014 Panama, Casco Viejo, Casco Antiguo Coming back to Panama from a recent trip, we stopped at Albuquerque and hit some antique stores....
Continue reading

May 22, 2015 Panama, Casco Viejo, Casco Antiguo Everyday I learn something new. Today La Prensa published an article about one of the few pieces...
Continue reading
Live, Work,
Invest
in Casco.
Arco Properties is the leading real estate agency focused exclusively on residential and commercial properties in Casco Antiguo since 2005. We are the only real estate company specializing in Casco Antiguo that donates 10% of its profits and 5% of the time of its staff in volunteering to non-profit organizations dedicated to the revitalization of the Human Heritage of the Casco Antiguo.