Panamanians will easily tell you that Panama`s population is a “crisol de razas”, an expression that means the country is a melting pot. Because of our geographic location, Panama became a natural trading hub. It is been said that it was here were tribes from both north and south met to trade. It certainly served its purpose during colonial times, and even today Panama is considered the “hub of the Americas”. As you may guess, this diversity showed in Panama`s culture and DNA, but there are very few places in Panama City where you can witness the architectural legacy of this melting pot better than in Casco Viejo.

Here is a clear example of this diversity: Casa de Abuela.

Even though Casco Viejo was “born” as a Spanish colonial city, the city itself was built and re built (it burnt three times almost to the ground) according to the influx of people that would come in waves to, for example, trade during the Gold Rush, build the French Canal, later with the American Canal. So you find here not only colonial style architecture, but beautiful examples of everything else both in an almost “pure” form or fusion.

One of the least well known styles in Casco Viejo is the Caribbean Style. Casa de Abuela is a beautiful and original example of Caribbean Style. It has a unique shape, a wide balcony with water views. The house took advantage of the wind corridor that hits the corner where its located by introducing throughout the walls “respiraderos” (breathers) in addition to windows. The upper level is double height and an attic at the roof serves as extra room but also as a flow for hot air to escape.

Records show the block existing since 1675, however, because Casco Viejo was caught in several important fires, records start mentioning this house around 1875.

Finding out a bit about 1875, and just to compare with what the World was doing back then, I find out that it was the year where George Bizet died and Camille Saint Saens premiered “Danse Macabre”, one of my favorite classical pieces. Panama was still part of Colombia.

An interesting info, thinking about the style of the house and its prominent location nearby the Presidential compound and one of Casco Viejo`s main plazas, might be that in Panama, slavery was officially abolished in 1850`s. The style and important location might be a witness of the actual roll that the black community, specially Afroantillians played in Panamanian society by then. Comparing, for example, to the United States at that time, I find out that still in 1875 they were forming Anti Slavery Societies (New York), which was very much an issue that continued to be so for much longer in that country… but somehow not in Panama. As a matter of fact, by 1893 one of Panama`s most important poets was born: Gaspar Octavio Hernández, later referred as the “Black Swan” because of his origins and elegant writing style. He used to work as a journalist at La Estrella de Panamá, one of Panama`s most important newspapers of the day.

Looking at “Casa de Abuela”, looking at the year it was built, the place where it is, its tropical elegance and details, I get the sense there is a hidden and beautiful history (if not lesson) behind it waiting to be discovered. Only in Casco Viejo! 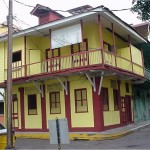 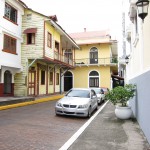 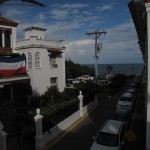 September 21, 2011 Panama Casco Viejo A signature feature of colonial apartments in Casco Viejo is the use of hand made tiles.  Colorful designs that...
Continue reading

May 29, 2013 Panama, Casco Viejo, Casco Antiguo Casa Burson: this option is great for a young couple or single person. It has two bedrooms,...
Continue reading
Live, Work,
Invest
in Casco.
Arco Properties is the leading real estate agency focused exclusively on residential and commercial properties in Casco Antiguo since 2005. We are the only real estate company specializing in Casco Antiguo that donates 10% of its profits and 5% of the time of its staff in volunteering to non-profit organizations dedicated to the revitalization of the Human Heritage of the Casco Antiguo.