I kind of dig the mystery and awe of bumping into good/ interesting art in the street. When I travel, I always look for those big or small corners of human expression, that space someone stole from a plaza or a wall and transformed it so that people passing by had a reaction, a thought, provoked a smiled or a protest. To throw at you a silent question, make you raise or low an eyebrow.  The Bienal in Casco Viejo has been so far a little bit like this. Today I`ll issue my small and humble review from someone who knows absolutely nothing about art.  So far, this is my favorite piece. It is at the Arco Chato, and it made me think about the connectivity we have as humans between each other, and the big floating pieces of adobe suddenly became a presence on its own, one very appropriate in a 300 year old colonial town that was built initially on those very materials. I think there was a story in the Popol Vuh that said that the gods have tried humans out of dirt first and that didn´t work out too well, so later they tried carving us on wood.  Since any of those creatures had much of a feeling, then they tried corn, which was sacred and therefore the legend comes out that we are the result from that final experiment. Seeing the iron/wood/adobe installation somehow reminded me of the materials we are all made of, which I hope was the point of the whole thing. Maybe I`m wrong!   Now, Popol Vuh aside, who is the artist? Silence. There is no sign, no explanation, recognition, big or small or even digital anywhere. Not even at the Biennale website. There is nothing easy to find about the great majority of the guest artists.

Was this mystery in itself part of the artistic happening? I doubt it. But I`m happy I bounced into this piece, I hope you like the photos I took. 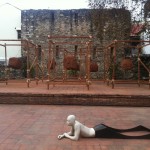 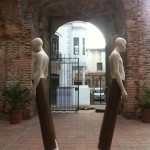 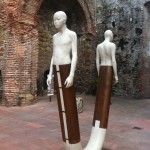 July 30, 2012 Panama Casco Viejo Check out Guías Express: Perfect for travelers who like the freedom of discovering a place by themselves but also...
Continue reading

February 22, 2013 Panama Casco Viejo I love the creativity of La Petite Bretagne! From photo and art shows to French & Canada nights, this...
Continue reading
Live, Work,
Invest
in Casco.
Arco Properties is the leading real estate agency focused exclusively on residential and commercial properties in Casco Antiguo since 2005. We are the only real estate company specializing in Casco Antiguo that donates 10% of its profits and 5% of the time of its staff in volunteering to non-profit organizations dedicated to the revitalization of the Human Heritage of the Casco Antiguo.