Yesterday, under the rain, a group of residents in Casco Antiguo went out “guerrilla style” and distributed 18 beautiful garbage tanks decorated by Panamanian artists.  Like “positive art bombs”, the guerrilla group moved swiftly through A Avenue, in an almost military operation to inject the historic city with fun urban creativity.

This project belongs to AVACA, Casco Antiguo`s Neighborhood and Friend`s Association, an organization that aims to see Casco Viejo become one of the greatest historic districts of the World.  From beach cleanings, to planting palms, Neighborhood Watch Program and even serve as a watchman for law enforcement, AVACA is usually involved in most of the community activities in Casco Antiguo.

The goal with this “Art -Tank” project is to help educate the public into disposing the garbage correctly, while providing with much needed tanks and beautifying the streets by injecting some great urban art.  Yesterday, already under the rain, locals were pointing out the cans and saying “look! look! wao!”. The cans were so pretty they thought twice about throwing garbage inside!

AVACA aims to collect enough funding to create 200 cans and be able to cover neighborhoods like Santa Ana.  So far,  in less than two months they`ve reached 40 cans and enthusiasm has grown.

Thumbs up to all the people who have helped and continue to help in this beautiful project! 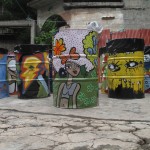 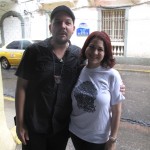 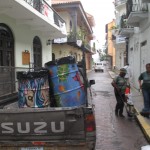 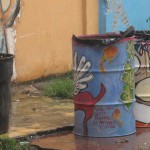 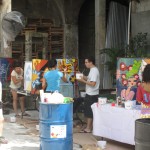 December 22, 2011 Casco Viejo, Panama, Casco Antiguo   On Tuesday, “La Vecindad” was packed with children. Almost 200 kids running around, some jumping literally...
Continue reading
Live, Work,
Invest
in Casco.
Arco Properties is the leading real estate agency focused exclusively on residential and commercial properties in Casco Antiguo since 2005. We are the only real estate company specializing in Casco Antiguo that donates 10% of its profits and 5% of the time of its staff in volunteering to non-profit organizations dedicated to the revitalization of the Human Heritage of the Casco Antiguo.