Tomorrow, starting at 7 p.m., Diablo Rosso will be showing art work from Mexican artist ARTEMIO.  Here is the info:

Provoking both the surprise and ire of many Mexicans was a study published in early 2009
by the United States Joint Forces Command, which grouped Mexico with Pakistan
as “two large and important states [that] bear consideration for a rapid and sudden collapse.”

Since that report, the Mexican government has conceded there are in fact wide swaths of the country
— primarily along the Pacific coast and Northern border — which now exist outside of Mexico’s rule of law.
From a state-based understanding of governance, these territories are anarchic, but they are clearly not without order.
Theirs is an order manifested by the extreme wealth and violence of the drug trade.

In Entropy and Art, Rudolph Arnheim wrote, “A revolution must aim at the destruction of the given order
and will succeed only by asserting an order of its own.”

Accordingly, in Artemio’s mandala works, we find a distilled mirror image of an apolitical revolution already underway,
based on an order imposed by violence and an apathetic public’s apparent willingness to be consumed and dazzled by it.
Guns, grenades, bombs, and machetes assemble themselves according to the same laws that govern the perfect
and infinitely variable crystalline structures of snowflakes. 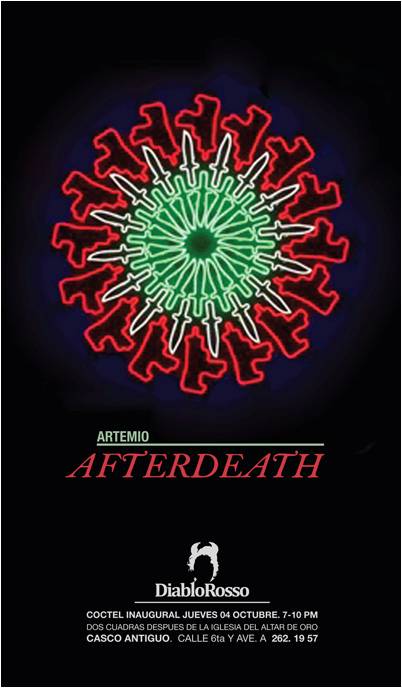 May 4, 2016 Panama Casco Viejo, Casco Antiguo As a realtor, I often meet clients who are moving in and out of apartments. Buying furniture...
Continue reading
Live, Work,
Invest
in Casco.
Arco Properties is the leading real estate agency focused exclusively on residential and commercial properties in Casco Antiguo since 2005. We are the only real estate company specializing in Casco Antiguo that donates 10% of its profits and 5% of the time of its staff in volunteering to non-profit organizations dedicated to the revitalization of the Human Heritage of the Casco Antiguo.