Ron Haviv is an American photojournalist who at his 23 years old, captured the iconic image of Guillermo “Billy” Ford attacked by a member of the Battalions of Dignity in Santa Ana in 1989. Haviv has covered more than 25 conflicts in 100 countries during last three decades.

Walsh, is a visual media and historical memory  professor from New York University, she met the photojournalist during an interview. She realice the international importance of that portrait 27 years ago and she asked herself: What happened to that photo and when the world stopped paying attention to this? 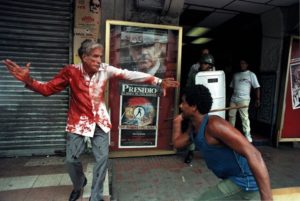 December 7, 2016 Christmas is here and you can breathe that feeling of solidarity, unity, joy, hope, family, love and peace. La Merced Church in Casco...
Continue reading

January 6, 2017 LUST is a boutique specialized in  limited edition SNEAKERS. They have the best selection of the brands that they handle. This is the...
Continue reading
Live, Work,
Invest
in Casco.
Arco Properties is the leading real estate agency focused exclusively on residential and commercial properties in Casco Antiguo since 2005. We are the only real estate company specializing in Casco Antiguo that donates 10% of its profits and 5% of the time of its staff in volunteering to non-profit organizations dedicated to the revitalization of the Human Heritage of the Casco Antiguo.