This is the week for 2015 predictions, so I went around asking a bit what people thought 2015 would bring both for Panama and for Casco. Since we are so focused on Casco, I reached out to my friend Kent Davis, from Panama Equity Real Estate, and he had an interesting view of the upcoming year:

“We’re still seeing tons of interest from foreigners looking to move to Panama.  Some are lured by the strong economy, some are fleeing political instability, and others are just seeking a new lifestyle and a new adventure.

I like the new administration and hope that the President and his team are able to keep Panama in the spotlight for all the right reasons.  I don’t think anyone realizes what a game changer the expanded Canal is going to be, and I like the fact that Varela has kept infrastructure improvements on the political agenda.”

We have always said real estate is all about niches. Panama on its own is a niche within a region. And within Panama, Casco Viejo as a historic city is a niche within a niche. Asking around residents and businesses on what they thought 2015 would bring to Casco,  two words came up: Community and Stability.

And they made a lot of sense.

If you`ve been following Casco, you might remember that 2013 was a year where all the streets where under construction, which made it difficult for everyone, specially businesses. 2014 saw the end of this project, but being also Presidential Election year, it was just not a typical one. Finally, 2015 is coming,  and now everything seems to be in place for everyone to stabilize and grow. For those who had visited the Casco during the last two years will notice the difference. Developers are submitting plans that were left in the oven during the Election time, so hopefully we`ll see some great projects being approved to start building and pre selling during 2014.

Also we`ve started to see a trend with new small non profit organizations and grass root groups starting to bring their energy to specific issues and areas.  I`m a big fan of empowerment, so I am particularly excited about it!

Hope this blog gave you a good idea on why Panama and why Casco for 2015.  We don´t have a crystal ball, but we believe that whenever strong fundamentals like uniqueness, strong community and stability are present, you have a wonderful recipe for long term value far beyond 2015.

In the meantime, enjoy the holidays! 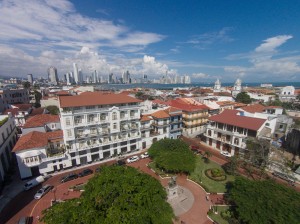 May 25, 2017 Panama, Casco Viejo, Casco Antiguo It kind of started as a joke, but I actually tried it with a client who was...
Continue reading
Live, Work,
Invest
in Casco.
Arco Properties is the leading real estate agency focused exclusively on residential and commercial properties in Casco Antiguo since 2005. We are the only real estate company specializing in Casco Antiguo that donates 10% of its profits and 5% of the time of its staff in volunteering to non-profit organizations dedicated to the revitalization of the Human Heritage of the Casco Antiguo.